Someone sent me these pictures last year. They are alleged to be actual photos taken of slave ships and children. I didn't recall slave traders taking children because there was not a market. But these pictures certainly look real enough. It can easily be researched to determine when photography was first invented. I am actually speaking very rationally and detached about these scenes now. But initially, as a mother I just wept to see these babies. while imagining what it must have been like to be snatched from ones home as an adult and how much more traumatic that would be to a child. So while I don't know if these are legitimate photos, I do know that 6-10 million human beings were kidnapped from Africa, my family among those taken from Nigeria among the Yorubas, and that some were taken with the complicity of other Africans. And they were brought to this country to work mostly in the fields and some as house servants. And I know that they endured lives of pain and suffering. We know that this Black holocaust did occur. And like the Jews, we know not to forget less we dishonor their legacies and their sacrifices. May we live our lives in service to that which is sacred in the universe and serving humanity's highest good so that we create the kind of world where such atrocities are not even possible. May we be able to hold the energy of that knowingness even when a contrary reality appears to prevail seemingly all around us. May we hold in our hearts and minds the world as we want it to be and then seek to live our lives so as to manifest those dreams and visions.
Blessed Be!
Qiyamah A. Rahman 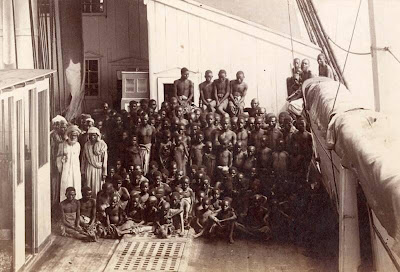 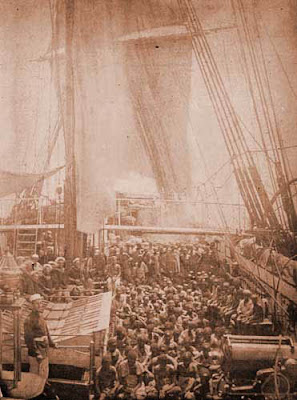 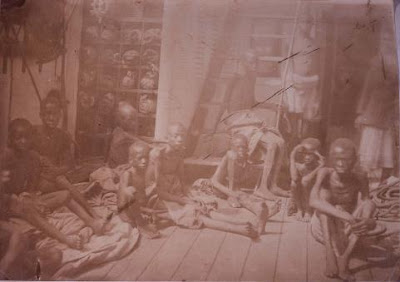 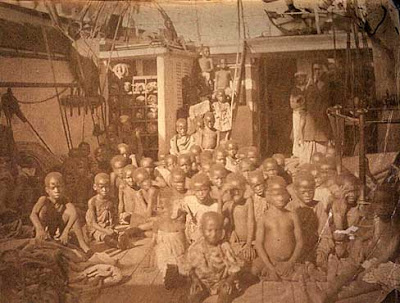 Well I just came across this account from 1860 in which the ages of slaves aboard a captured ship indicate they were mostly children:

These are very interesting pictures you have. Are you interested to sell them? If not would you be willing to let me look at scans of them-- I mean really good ones? If they are originals they will have an incredible amount of detail. You yourself can explore that by taking them to your local photocopy store and colour enlarging them 400% -- you will be amazed. It is the equivalent of having 100 pictures by todays standards.

Excuse me for posting twice, but I want to communicate how really valuable original photographs of such images are. You see, most Africans can look at another African and work out where (ie what ethnic group) they come from with a good degree of accuracy-- not to mention scarifications, etc. Thus a photo like this is a great connection since it may be possible to track down what happened to these individuals once they were in the New World...

I found your pictures as I was looking for images of slavery to show my students in an Am History survey course in community college. I have a short time to make a significant and thoughtful impression. These images are very moving, overwhelming actually. Where did you get them, so that I can possibly cite them properly and may I show them to my class as part of my lecture?

Laura: I don't recall where and how I obtained them. I think someone sent them to me or I could have run across them surfing the internet and saved them. You are free to use them.

In the future I will make more inquiries about the source. As a researcher I should know that.

Coz: Thank you for your interest and your comments. I don't have the originals. They were emailed to me as attachments and I don't even recall by whom.

I am going to check out the website addres you listed though. I tried to contact you earlier and it wouldn't go through. So I thought you might be in the neighborhood and see this post.
Rev. Qiyamah

I know this is old, but I just wanted to notify you of a slight error in this post. To quote: "I do know that 6-10 million human beings were kidnapped from Africa...and that some were taken with the complicity of other Africans." Actually nearly all African slaves were kidnapped by other Africans. In many African societies slavery was commonplace and an essential part of the economy. The trade was exacerbated by the Europeans though, and the kidnapping, raids and wars were stepped up to bring more slaves to market. Many Africans were so used to slavery that once they were free they would come to own their own slaves. Of course the treatment of slaves by each group was far different.

Thanks for this info...children were taken if they were between 6 and 17, those under six were "eliminated" - according to the narrator of one of the slave houses I recently visited

I will use the pictures in one of my articles and reference your blog as the source. Thanks for this

Keep Your Eyes on the Prize! 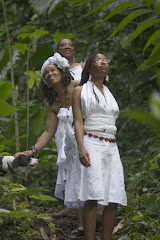 Front to Back Kaleema H. Nur; Qiyamah and Stephanie Berry

Qiyamah A.Rahman
Frederiksted, Virgin Islands, United States
I am the third oldest of ten siblings. Me and two of my older siblings, Betty and Freddie, were born in Hawkinsville, GA in the same house that our mother was raised in with her parents and siblings. We were all delivered by our Aunt Judy Bell, who was the local midwife. Our amazing mother has managed to hold onto 33 acres of that same land which she has now passed on to me and five of my siblings. I am a Unitarian Universalist minister and former social worker and teacher(graduate of University of Michigan) and research activist (Clark Atlanta University). I currently work at Meadville Lombard Theological School as the Director of Contextual Ministry and Senior Lecturer. I live in Chicago, IL where I have resided since 2007. Previously I lived in Charlotte, NC for seven years and prior to that in Atlanta for thirty five years on and off. I grew up in Detroit, MI. I expect to retire in about ten years and thus I am beginning to think about what that means as it relates to Hawkinsville and building a home for myself on our ancestral land. I have three adult children, Libra, Kaleema, Muhammad and one grandson, Brandon and a cat named Lily. 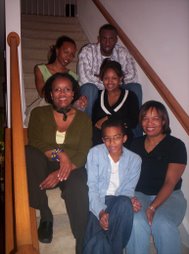